Combine Cuba with a little French sophistication (in the architecture, not the cuisine), throw in some UNESCO money and welcome to Cienfuegos.

Our morning which had started somewhat anxiously as we arrived at Havana’s Viazul terminal nice and early in the hope of procuring tickets for that mornings bus to the quiet, coastal city of Cienfuegos.

There followed initially a wait for the office/terminal to open (an event that occurs around 7am), where we stood at the front of the queue, only to promptly learn that ticket sales would not open for another half hour!

Whilst this small series of events unfolded, Julie (Sarah’s mum) had kindly waited outside minding our luggage, as we’d raced in an attempt to be at the front of the ticket queue. In this time she’d begun chatting with a Canadian couple who had a taxi driver prepared to take them to Trinidad for the same cost (per person) as the bus.

The only catch, he wanted at least 4 people. Now with Cienfuegos being along the way, we quickly abandoned our place in the ticket line, and were shortly on our way in the relative comfort of a mini-van!

Slowing down to the Cienfuegos pace

Our casa in Havana had suggested another home in which we might like to stay, however as soon as we bundled ourselves and our packs out of the taxi, we were met (this is a common occurrence) with many alternative offers for accommodation.

I’m sure that the host from the suggested casa would also have been there to meet us, had we arrived on the bus at the time they were expecting, but with our taxi option we were well ahead of schedule so took the opportunity to first inspect this casa (which was perfectly located for us around the corner from the bus station), which was immaculately presented and also cheaper than I expect we would have been paying at our suggested house.

With our bed for the night sorted, it was time to inspect the town, and after the hustle (on every level) and bustle of Havana, this place felt the polar opposite.

Although there were a few people about attending to their daily business and the odd shout out querying our desire (which as ever was non-existent) for a taxi, it was lacking the volume of people and traffic on the roads, the obvious advantage of that being the absence of as intense levels of smog!

Grabbing our bearings, we made our way towards the main plaza (we’d already been accosted by and agreed to a taxi rather than queue for bus tickets for the following mornings’ trip to Trinidad) which is usually the hub from which most of these towns and cities sprawl.

The stunning Palacio de Gobierno, one of the beautiful buldings that front Parque Jose Martí

I should add at this point that it was a damn hot day, so with food starting to creep into our conscience, we wandered up one of the boulevards that ran like spokes away from the plaza. This particular one was closed to traffic and full of stalls selling all sorts of crafted souvenirs, just lacking in tourists.

Making our way towards the waterfront, Sarah sporting a brand new straw hat, possibly the result of when impulse meets peer pressure, we had hopes of finding somewhere pleasant to dine and relax for a time.

Unfortunately we knew we were near the waterfront, long before we actually got there, the smell, a combination of mangrove mud meets salt, with a little bit of trash thrown in for good measure quickly seeing us change our plans and head back towards the main square, Parque Jose Martí.

Here however, our options remained slim with us eventually forced to settle for cold beers and cheese sandwiches in a place that seemed geared towards the busloads of package tourists that seem to pop up wherever we are in Cuba.

We could readily see how the city had earned its UNESCO billing, however it didn’t really have that much of a buzz about the place, so we decided to head towards the malecon (sea road) in the hope of finding something better.

Perhaps it was ultimately something we may rue, but just as we finally reached the start of the waterfront, the heat wore us down and instead of continuing on, we purchased a few cold beers and made our way back to the casa, not to emerge until the sun had set and our hunger had again come to the fore.

After wandering aimlessly, just as we were about to concede defeat and hope that the palatial looking government hotel would have a restaurant, we found a small place and settled on a couple of dishes to share (chicken and pork) and some last beers to cap off the night.

Breakfast, having accepted the offer of having it prepared by our casa the previous day, afforded us the luxury of a short lie in (we were probably up just before 8am), was a grand affair of fruit, juice, coffee, eggs and bread, the amount remaining on our plates something of an embarrassment to me given how little these people have to live off (at least those with the Casa Particulars now seem to make a pretty good living). 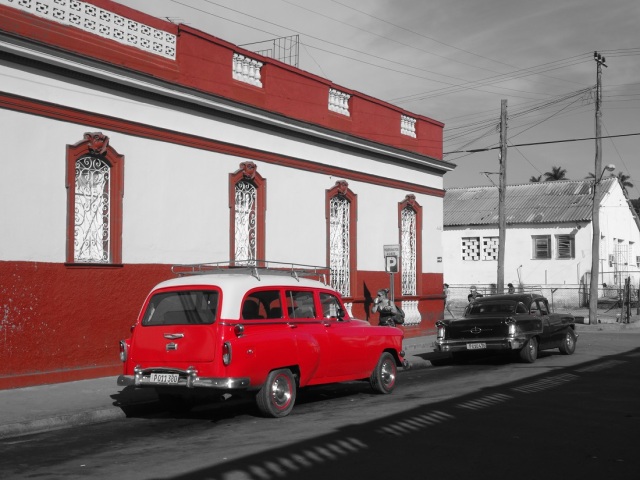 Our casa’s street, quiet despite the proximity to the bus station

A quick wander back to the main square to ascertain if a Monday morning might prove more exciting than a Sunday bore little fruit, before we bundled ourselves and our luggage into an aged Chevy (no mini-van this time), for a cramped and somewhat smoky ride to Trinidad.

* Viazul buses from Havana to Cienfuegos cost $20.00 CUC for the four hour journey, however we were able to team with a Canadian couple and take a mini-van taxi for the same price as the bus (per person).